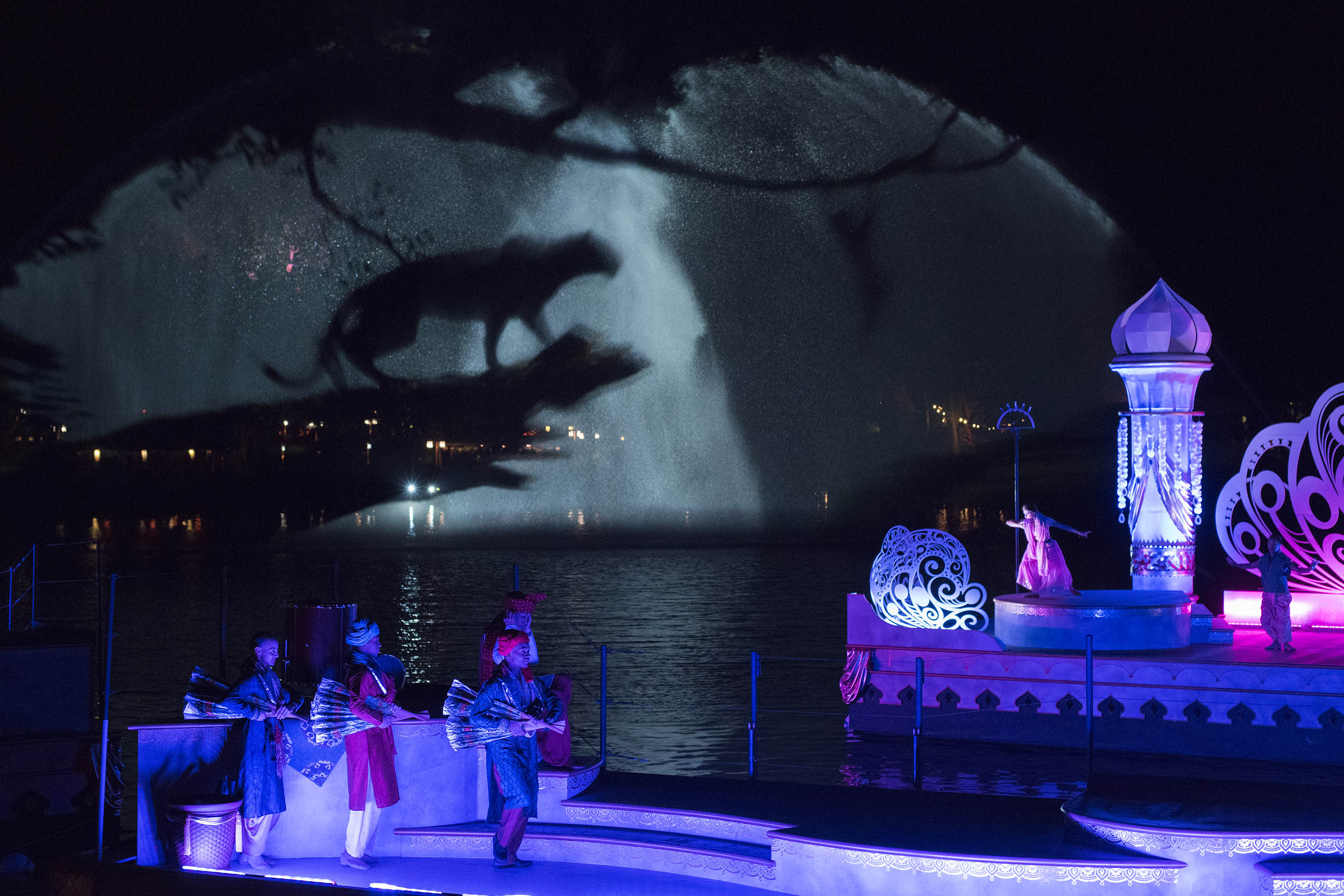 “The Jungle Book: Alive with Magic” welcomes guests to the dangerous, captivating world of the young “man cub” Mowgli and the jungle animals that protect and threaten him. Featuring traditional Indian music as well as the wildly popular songs of The Jungle Book, the show immerses guests in the culture of and beauty of India and the peril of the jungle with singers, musicians, dancers and visuals.

The show’s opening number begins with an ethereal Indian chant in the Rajasthan style, then builds to an energetic sound featuring drummers and performers offering gifts of light with a dance of candles. The music segues to the film’s score, and the show’s water screens rise to reveal an image of the ornate cover of “The Jungle Book” story by Rudyard Kipling. As the book pages open, an engraved jungle scene transitions from black and white to the colorful 3-D world of the film. 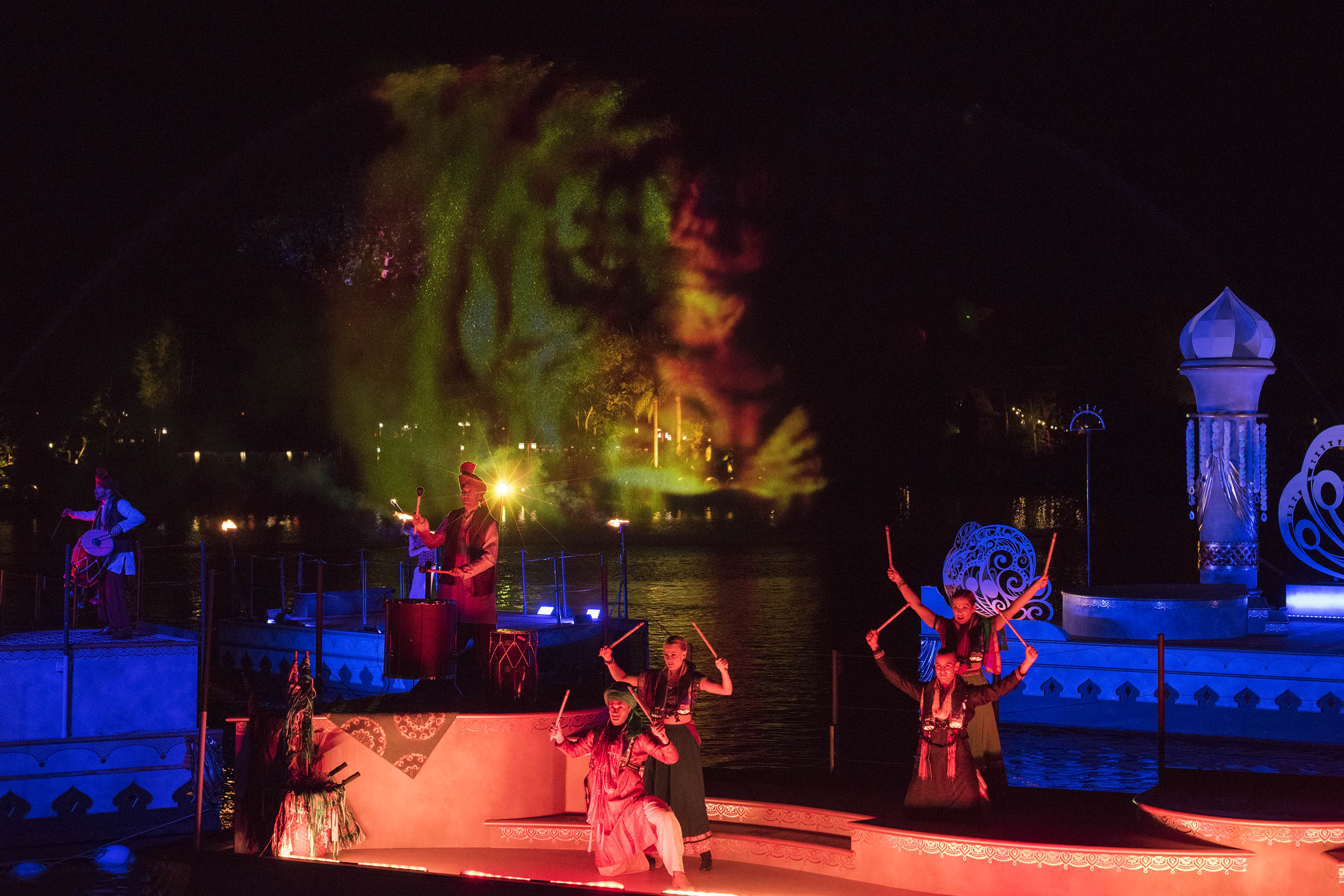 Driven by John Debney’s “The Jungle Book” film score, the show’s live music is arranged in Indian styles that feature the sitar and tabla drums for beloved tunes including “The Bare Necessities,” “Trust in Me,” and “I Wan’na Be Like You.” Big-screen images from the film combine with impressionist projections and narration by the panther character Bagheera, to open a portal into the artfully-told story.

The 25-minute show is awash in special effects that include fire, and massive water-screen projections. While some of the cast tell the story from water’s edge and inside the theater, multiple barges and boats become additional sets pulsating with dozens of performers, scenic backdrops and light and fire effects.

“We’ve been fortunate to work with an amazing team of collaborators from around the world, from the filmmakers behind the blockbuster movie to a creative team of artists who helped to infuse our show with authentic aspects of the culture of India,” said Michael Jung, executive creative director, Walt Disney Imagineering.

Poignant film moments resonate, as when “wolf-mother” Raksha says farewell to Mowgli and tells him, “You will always be my son.” As the journey proceeds, guests will flinch at the sudden roar of tiger Shere Khan that leads to a thrilling chase, and they’ll laugh at antics of Baloo, the free-spirited bear and pal of Mowgli. As the tale unfolds, the audience can’t help but be mesmerized by the frighteningly hypnotic charm of Kaa. 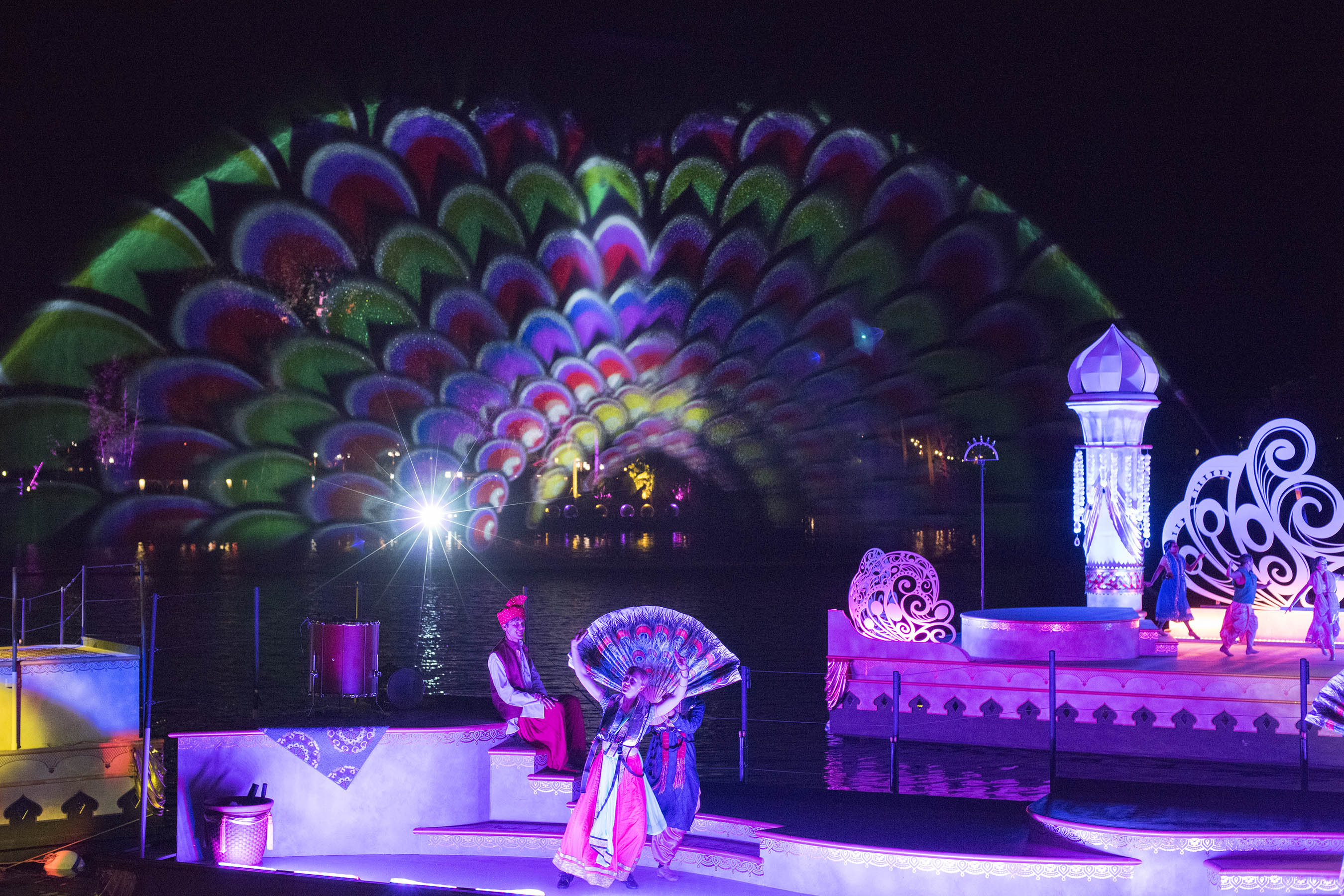 Breathtaking water-screen images of an elephant herd, a virtuosic fire performance and dynamic live percussion build to a frenzied show climax. For the show finale, the cast of “The Jungle Book: Alive with Magic,” performs an Indian-influenced mega-medley that becomes a boisterous mash-up of the acclaimed film’s top tunes, and performers spread throughout the aisles to transform the amphitheater into one huge immersive party celebrating the music, story and world of “The Jungle Book.”

As guests depart Discovery River Theater, they can continue celebrating in other areas of Disney’s Animal Kingdom, where the evening comes alive with wondrous new nighttime experiences and a party-like atmosphere.