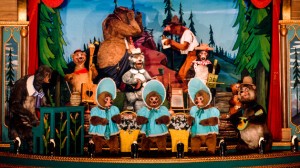 If you have visited Walt Disney World at any time since its opening in 1971, it’s likely that you have enjoyed the Country Bear Jamboree in Frontierland at the Magic Kingdom. It’s basically a western stage show with a delightful crew of 18 singing and strumming Audio-Animatronic bears, featuring hand-clappin’ and knee-slappin’ country music.

Walt Disney originally planned for the show to be placed at a ski-resort that he was planning to build in Mineral, CA the mid 60’s.  While the resort was never built, his dream of the Country Bear Jamboree was carried out by imagineers and moved to Florida for the grand opening of Magic Kingdom.  It was one of the very last attractions that Walt Disney personally helped to develop.

Country Bear Jamboree is fondly known as the “Wildest Show in the Wilderness”!  It’s a place for young and old alike to enjoy an old-fashioned hoedown and refuge from the hot Florida sun or afternoon thunderstorm.  The show is upbeat and hilarious and includes catchy country ditties that will have you singing along.  The bears perform on 5 stages. Characters rise up from the stage on decorative platforms. Some descend from the ceiling.

The entire show was refurbished in 2012.  The bears were outfitted with new fur and the show was shortened a bit. A couple of songs and some dialogue were removed, thereby speeding up the show and keeping up the momentum of audience participation.

Be sure to head on over to the hootenanny at Country Bear Jamboree for some toe-tappin’ country music fun on your next trip to Walt Disney World.  You’ll have a roaring good time!

Written by Sheri Morris, “Main Street Morris”   Sheri is proud grandmother with a keen eye for detail.  She specializes in Disney Travel for adults and RV travel.  Book your next vacation with Sheri at (804)405 5005 or at sheri@destinationsinflorida.com.