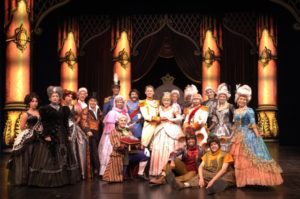 Twice Charmed: An Original Twist on the Cinderella Story is one of the Broadway style shows on the Disney Magic.  Twice Charmed lasts 50 minutes and is shown in the Walt Disney Theater.  The show opens with a quick recap of the Cinderella story to refresh your memory just in case you haven’t seen the film in a while.  The first scene of the musical is Cinderella’s wedding day.  There’s a quick musical number about how Cinderella’s princess story came true because of her glass slipper.  Lady Tremaine, Drizella, and Anastasia are upset and state that none of this would have happened if they had known Cinderella had the other glass slipper.  All of a sudden Lady Tremaine’s wicked fairy godfather, Franco, pops up.  Franco makes Lady Tremaine a deal she can’t refuse and grants her an evil wish.  Time is turned back to the moment when the Duke is looking for the maiden that fits the glass slipper.  Lady Tremaine rushes to Cinderella’s room, breaks the glass slipper in Cinderella’s apron, and gets Franco to shrink Cinderella to the size of a mouse.  When the footman drops the other glass slipper Lady Tremaine convinces the Duke to take her two daughters to the castle since they are the only maidens who were not able to try on the slipper.  The prince refuses to choose between Drizella and Anastasia.  Instead, he runs off in search of the girl he met at the ball.  In the meantime, Cinderella’s fairy godmother has returned her to her normal size.  The prince gets discouraged and eventually gives up the search.  The prince returns to the castle and requests another ball to find his future bride.  Just as the prince is about to choose a bride, Cinderella arrives and reclaims her rightful place with Prince Charming.  Check your Personal Navigator to make sure you don’t miss a chance to see how Cinderella was able to live happily ever after again.

Written by Shante Carson — Shante is a Disney Cruise Expert with eleven cruises taken on the Disney Dream, Disney Wonder, Disney Magic, and Disney Fantasy.  Bon Voyage!  Shante is ready to help you plan your magical Disney Cruise vacation. Book your next vacation with Shante at 252-917-0497 or shante@destinationsinflorida.com.