Disney characters appear in an array of different settings on every Disney Cruise.  Mickey, Minnie, Goofy, Donald, and Pluto make their first appearance during the Sail Away Deck Party.  During the deck party, the characters help you kickstart your cruise with a live stage performance. 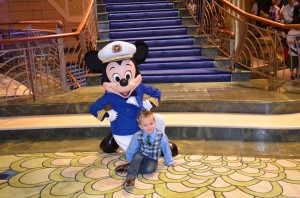 The characters appear in several live stage shows throughout your cruise.  They really shine in the Broadway style shows in the Walt Disney Theater.  Each day there will several character meet and greet opportunities.  There is a list of all the character appearances with times and locations on the back of your Personal Navigator each day.  You will be able to take pictures with Mickey, Minnie, Donald, and Goofy every day.  The characters have several different outfits to wear during the cruise so your pictures will all be different. 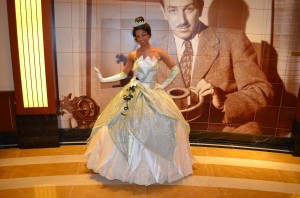 The Disney Princesses are also a very popular meet and greet.  In addition to the scheduled character appearances listed on your Personal Navigator don’t be surprised if you happen to see a princess walking down the hall for an impromptu photo opportunity.  If you want to get pictures with all the princesses at one time make sure you attend the Princess Gathering.  The Princess Gathering usually occurs twice.  You should arrive a few minutes early to get in line for this royal gathering.  Disney’s private island, Castaway Cay, is full of characters.  You can find Captain Jack Sparrow, Captain Hook, Mr. Smee, Mickey, Pluto, Daisy, Chip & Dale, and a few others around the island.  Everyone will be wearing their best pirate gear.   The characters love to drop by the kids’ areas especially at the Oceaneer’s Club and Castaway Cay. Disney Cruise Line offers a character breakfast for cruises 7 nights or longer. There are so many ways to enjoy your favorite Disney characters during a cruise and many opportunities to do so.

Written by Shante Carson — Shante is a Disney Cruise Expert with ten cruises taken on the Disney Dream, Disney Wonder, and Disney Fantasy.  Bon Voyage!  Shante is ready to help you plan your magical Disney Cruise vacation. Book your next vacation with Shante at 252-917-0497 or shante@destinationsinflorida.com.