Disney Cruise Line’s original vessel, the Disney Magic, is 15 years old – an old-timer in the cruise ship industry, but instead of retiring the ship, Disney completely overhauled it from stem to stern.  President of Disney Cruise Line Karl Holz said, “each ship has a unique identity and personality of its own, and Disney will continually maintain each ship to high standards in order to exceed guest’s expectations.”  I was a guest of Disney Cruise Line, invited to preview the “Re-Imagined” Disney Magic, and experienced all the new ship has to offer.  Certainly the most talked about additions to the ship are the AquaDunk water slide, with its 3-story free-fall drop and the Marvel’s Avengers Academy.  However, no aspect of the ship has gone untouched.  Continue reading for a rundown of all of the new amenities, and for a Dad’s perspective on the particularly guy-friendly features of the ship, check out Disney Magic Re-Imagined – for Dad!

One of the biggest expenditures of time and money went into redesigning the ship’s atrium.  Removing one stairway, shifting the signature, bronze “Helmsman Mickey” statue, and installing a new Art Deco crystal chandelier has created a brighter, more open, much grander entrance to the ship. 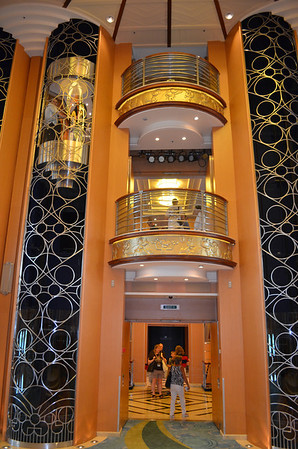 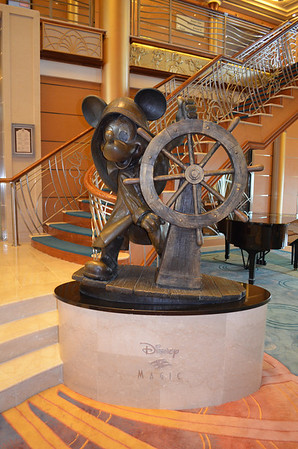 The Oceaneer Club has added new characters, rooms, and stories allowing children to step inside their favorite books and movies.  Disney Imagineers recreated Andy’s Room from Disney/Pixar’s Toy Story where kids can play with larger-than-life Mr. Potato Head and Hamm the piggy bank underneath Andy’s bed, climb the steps on top of his bed, and slide down a twisting Slinky Dog slide.

The fairy world of Tinker Bell’s Pixie Hollow was designed complete with a teapot containing dresses and costumes for kids to play dress-up.  Another space is the Mickey Mouse Club where kids can craft and create in a red, yellow, and black Mickey Mouse inspired space.  However, the large, green, elephant in the room is The Avengers.  Oh wait, sorry, that wasn’t an elephant, that’s The Hulk.

Marvel’s Avengers Academy is a high-tech S.H.I.E.L.D. command base built to recruit kids for a secret multi-day mission.  Imagineer Joe Lanzisero had fun creating The Avengers Academy saying, “it’s a great story; it’s a great universe; and it’s inspirational.  What kid wouldn’t want to be a Super Hero?”  During the two-day mission, kids become S.H.I.E.L.D. agents by order of Director Nick Fury, and Captain America meets the new recruits to check in on their training.  Along the way, children discover the villain Red Skull is trying to turn the Disney Magic into a super weapon, and only they can save the day. 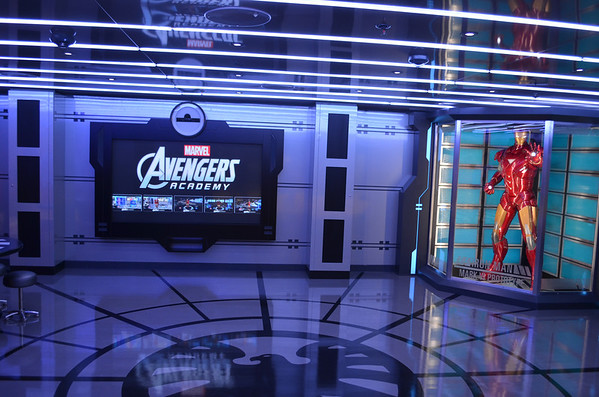 While the kids may get the super hero fun in the Oceaneers Club, the whole family will want to give the AquaDunk water slide a try.  The slide’s start is attached to one of the highest points on the ship – the forward funnel.  Step into the clear capsule, and 3… 2… 1… ‘Anchors Away!’ the floor opens out from underneath, dropping you over 30 feet in a near free fall.  The quick, thrilling plunge sends riders over the edge of the ship, looking out at the sea 112 feet below.

The AquaDunk may be a little too thrilling for little ones, but the younger set has their own AquaLab splash ground that includes a new “Twist ‘n’ Spout” slide with over 250 feet of slippery turns.  At the bottom of the slide are dumping paint buckets, bubblers, and sprayers, sure to provide hours of watery fun. 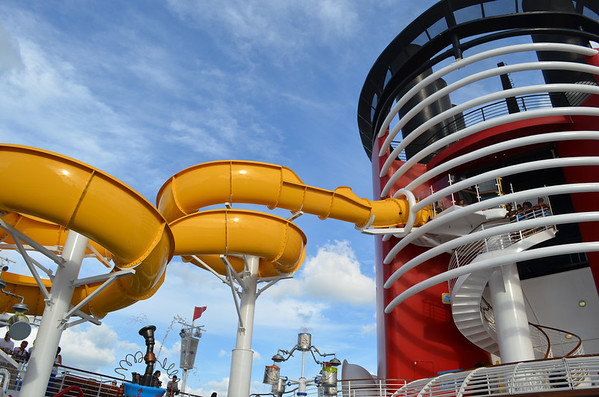 The family dining spaces have been revamped including “Cabanas” – with gorgeous wood paneled murals illustrating the story of “Finding Nemo.”  Cabanas offers a buffet option for breakfast and lunch, and a casual, non-scheduled sit down dinner in the evening. 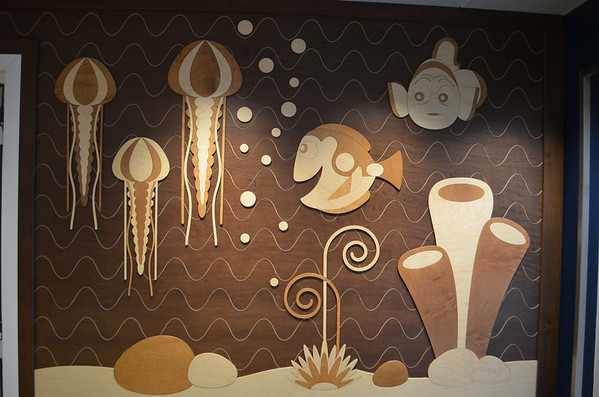 “Carioca’s” evokes the spirit of Rio de Janeiro with a wavy patterned sidewalk running down the center of the room and flickering lanterns overhead.  Lunch is a buffet, but in the evening a scrim of Rio de Janeiro’s nighttime skyline is pulled across the kitchen area, and elegant Latin-themed dishes like slow roasted pork belly, fried plantain, and caipirinha cocktails are served. 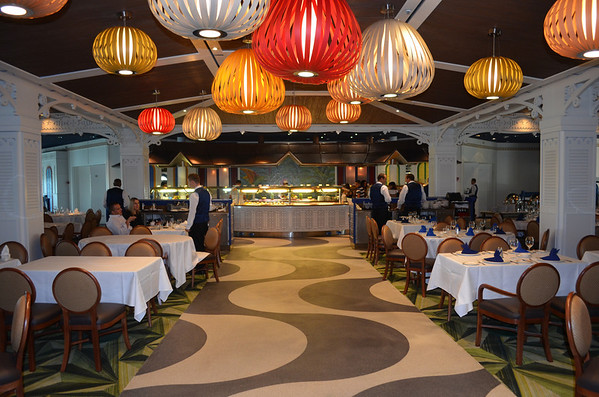 The highlight of the Disney Magic dining experience is the show restaurant “Animator’s Palate.”  Imagineer Lysa Migliorati called Animator’s Palate her “Happy Place” on the ship, and seeing the new show brought tears to her eyes.  As before, walls, ceilings, and table dressings are all black and white, while video screens on the walls sketch out character portraits.  As the dinner progresses, color is slowly added to the pencil drawings as they get their ink and paint treatment, revealing animation cels from familiar Disney movies.  With a sprinkling of pixie dust, the “Drawn to Magic” Grand Finale begins surrounding guests in a full-color video performance through the stories of Disney and Pixar animated films.  Sorcerer Mickey leads a parade through the restaurant at the conclusion.  Chief Creative Officer for Walt Disney Imagineering, Bruce Vaughn, likened the “Drawn to Magic” Animator’s Palate show to the popular California nighttime spectacular “World of Color.”  Vaughn commented, “I felt like I was immersed in World of Color, and able to enjoy a great meal at the same time.” 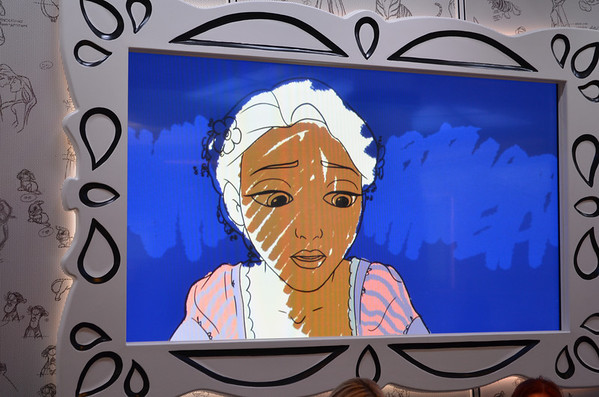 If you’re looking for adult diversions, the nighttime entertainment district also received attention with all new venues for dancing, comedy, music, and shows.  Including: 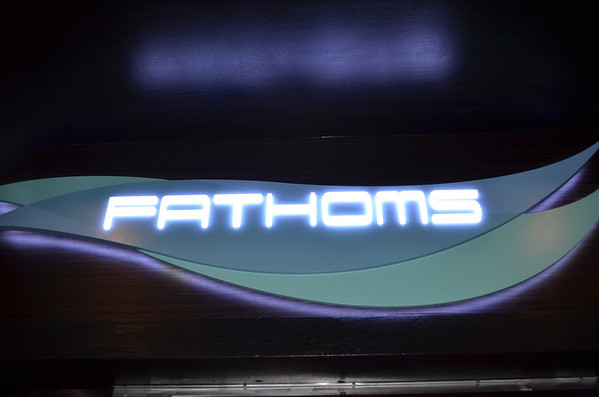 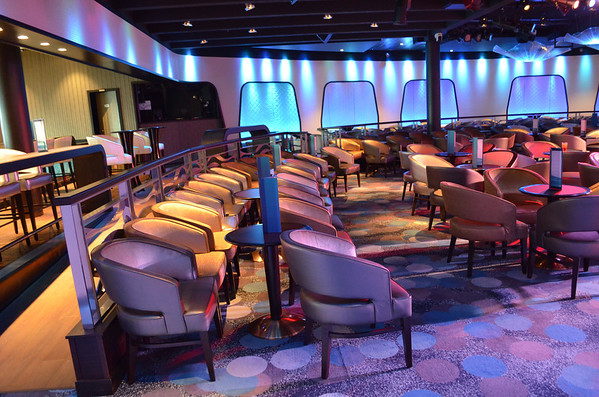 Last, but certainly not least, when you’re ready to crawl into bed for the night, rest and prepare for your next day’s adventure, your stateroom has been updated.  From small, subtle features such as elevating the bed so luggage slides underneath – offering less clutter and more space for families, to including new furnishings and décor to surround you in atmosphere of the golden age of cruising.

The Disney Magic may be 15 years old, but the timeless design, new innovations, and additional experiences make it a ship that families will enjoy for many years to come.

Guest Post Written By Dave Parfitt. Dave is a freelance writer and founder of the nationally recognized family travel website AdventuresbyDaddy.com.  In addition to Adventures by Daddy, Dave’s articles have appeared in Parade Magazine, Yahoo! Travel, and Huffington Post Travel to name a few.  When not traveling, Dave can be found in a houseful of women (wife and two girls) in the beautiful Finger Lakes Region of New York.