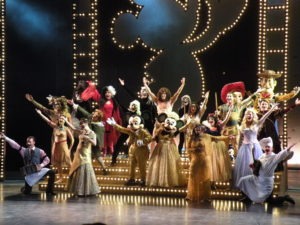 Disney has some of the best shows at sea.  One of my favorite Disney productions is The Golden Mickeys.  The Golden Mickeys is one of the signature, Broadway-style shows on Disney Cruise Line.  The Golden Mickeys is currently being performed on the Disney Dream and Disney Wonder.   Unlike any other show, The Golden Mickeys starts before you enter the Walt Disney Theatre.  As you pass the shops you will see the red carpet leading you into the theatre.  Make sure you arrive early so you can be admired by the paparazzi.  You may also be interviewed as you arrive on the red carpet by the celebrity interviewer, Rona Rivers.  In case you haven’t already guessed, The Golden Mickeys is based on a Hollywood awards show. When the show starts, the stage manager is in crisis mode because the Master of Ceremonies did not arrive.  As you know, the show must go on so the stage manager has to take on the role.  Awards are given to different Disney characters in various categories such as romance, heroism, villains, and friendship.  Characters perform a song and dance number before they accept each award.  The show is updated regularly with new video clips and new Disney characters.  I don’t want to spoil the ending so all I will say is you can expect some Disney magic!  The show is approximately 50 minutes.  Showtimes will be 6:15pm or 8:30pm.You will need to check your Personal Navigator to find out which day the show will be performed on your cruise.  I highly recommend that you gather your entire family and watch this heartwarming Disney classic.