AquaDunk is a three-story body slide being added to the pool deck. It begins with a near-vertical drop that sends guests on an exhilarating ride in a translucent tube that extends 20 feet over the side of the ship. 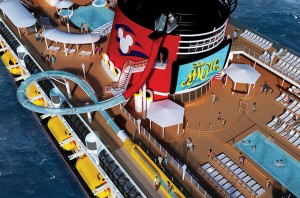 Carioca’s is a new Rio de Janeiro themed restaurant where, during the day, there’s a festival theme and, when night falls, the atmosphere transforms into an after-hours city scene with softly illuminated lanterns flickering overhead.

The adult entertainment district will now be called After Hours.  After Hours will include Fathoms night club, Keys (piano bar and lounge), and O’Gills (Irish pub and sports bar). 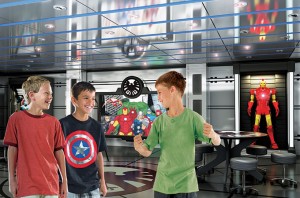 My favorite new addition is Marvel’s Avengers Academy and the Mickey Mouse Club in Disney’s Oceaneer Club.  Although this area is open to 3-12 year olds I sincerely hope that there will be plenty of open house slots so I can bring out my inner superhero!