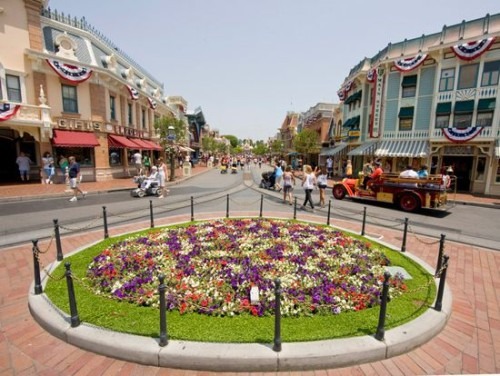 When you first enter the park the ground is red brick. Walt wanted you to feel like you were entering on a red carpet, being treated like royalty. Also he added the tunnels to walk through so that once you came through them you would feel you were entering a new world. I’d say he hit it right with the tunnels. Thankfully he was talked out of walking through curtains. Imagine the disarray that would have caused.

When you are at the end of Main Street, USA looking towards castle, Imagineers used “Forced Perspective” to make castle appear larger. It’s a trick where the buildings get smaller the further down the street you go. Disney has used this “trick” in every theme park since.

Did you know the names on the windows above the shops, on Main Street U.S.A. are real people? Most are Imagineers who were essential to fulfilling Walt’s Dreams. You’ll see up there is UB Iwerks. UB was the first one to join Walt at his new studio. UB is also co-creator of Mickey. Many more Imagineers and other key people are immortalized on these window panes as their own proprietors.

Those Imagineers and Walt sure did come up with some amazing tricks to get us visitors to do the right thing. For instance the only place in the park that has a black street is Main Street… Why? Black gets hotter than any other color which in turn makes you want to move towards the castle and not create a bottleneck along Main Street…

Have you noticed that if you stand on the sidewalks of Main Street the trees block your view of the castle? And vice versa if you’re on the street? Here’s why! It was decided if you were on the sidewalk the best way to get you into the stores was to block the view of the castle and surrounding park… Just as if you’re standing in the street, the trees block the stores and will not distract you from moving along towards the castle. No wonder they are called IMAGINEERS!

Here’s one most people don’t consider but will have a “D’uh!” moment when you read this. You never hear the sounds of Anaheim which is right outside the gates. Guess what else you don’t get from Anaheim…???  The smell. Yup Disneyland has what are called Smellitzer’s around the park. You never knew it happened, but you also aren’t smelling car exhaust or any other city smells. Most people know the instance of the citrus smell on Soarin Over California. That’s one you could hardly miss, but many more exist to give all your senses access to the magic! How bout some fresh baked cookies on Main Street, USA? Yeah you probably thought they were being baked right then.

Contact DisneyDaniel today to book your first, next or Best Disney Vacation!

Written by Daniel Mullarkey, DisneyDaniel — Daniel is a self-proclaimed Disney Geek, Disney Vacation Planner and a Disney Specialist! When he’s not adding to the plethora of Disney trivia in his head, you can find DisneyDaniel on his Facebook Page and/or follow him on Twitter!  Book your next vacation with Daniel at 425-420-8988 ordaniel@destinationsinflorida.com.